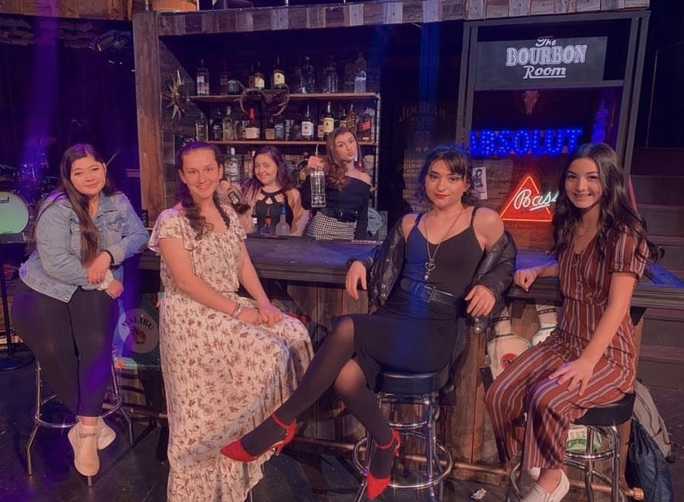 Heritage is known by many for its amazing theater program and shows put on throughout the years by the Rising Stars club. Many praise the actors and singers upon the stage, but a majority of them do not appreciate the work done behind the scenes to make an everyday student transform into their assigned role. They often don’t know that the Hair and Makeup crew are the ones to thank for these marvelous looks.

Towards the beginning of the show’s auditions, students also got a chance to audition to be apart of the makeup crew for this year’s musical, The Rock of Ages. Those who had participated in hair and makeup crew before got to continue without any questions asked. But, due to a large number of people wanting to apart of the show, head of the crew, Emily Haynes (11), put candidates against one another by making them create 80s inspired hairstyles and makeup.

“We chose who made the best look as well as who had the best work effort. Also, how they worked with others,” specified Haynes.

Once members were chosen, the process of preparing for the show began. Lots of hours are dedicated to learning hairstyles and makeup looks for each of the actors on stage. These students stay 3 hours after school Monday through Friday, as well as 8 hours on Saturday to top it all off.

“When I first started, I wasn’t prepared for how much commitment [crew] involves, but soon after I started, I realized that it would take up a large amount of my time,” said Emma Woolard (10).

As a result of spending lots of time together, these girls have come to form unforgettable bonds that will stick with them throughout their lifetime. They all equally share the passion of turning an individual into something different and memorable with the help of makeup and hair tools.

“Everyone in our crew is so supportive and nice… I always know I can come to them if anything’s wrong. They are some of the most talented and wonderful people I know,” gushed Sierra Johnson (12).

These girls are crowded with the pressure of time and the crowd’s appreciation of the actor’s appearance. With the musical’s opening night landing on February 22, the hair and makeup crew have a lot to perfect before that time comes.

“I think that people don’t realize how much work the crew puts into the play, [we put in] just as much as the actors. We all put in our time and dedication in to make the show the best it can be,” explained Kyla Prince (12).

As opening night quickly approaches, hair and makeup crew works night and day to perfect their looks before the show. Without the crew, the Rock of Ages wouldn’t be complete.