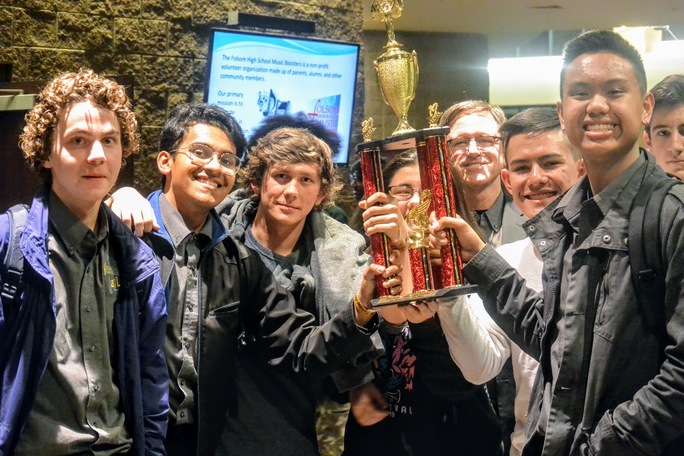 Since the Heritage High school Jazz bands started attending the Folsom Jazz Festival, none of their competitions have ended in a win, until now.

Taking home fourth place was a huge accomplishment for the band considering their competition consisted of well known art schools and some of the most prestigious jazz bands in the state.

The awards ceremony was filled with excited band students, eagerly awaiting the results of the competition that had started that morning at 6:45 am. When Heritage was announced as a winner, to no one’s surprise, the students started jumping and shouting with joy but also a bit of surprise.

“It really was a bit surprising. This is the first time we’ve won since I’ve been here,” admitted Gabriel Leria (12), a drummer within the band.

“I really didn’t expect to place but that’s just me being hard on myself and my band. But taking home that trophy really boosted confidence in myself and the band. Especially in the next coming month,” claimed Jyrhed Suribia (11). Suribia is the lead trumpet player in the band that placed and was extremely excited to have helped lead his band to victory.

“[It takes] Hours and hours and hours of practice. And repetition. Getting to know who you’re playing with. I hone in on one person and I really try to listen to what they’re doing. It helps me with improvisation,” explained Michael Hards (11). As the other drummer in the band Hards uses a lot of his energy in conducting the band and keeping time for them.

The jazz band is one of the lesser known groups on Heritage’s campus but the band still received a grand welcome back from the other music groups. Many of the students agreed it would be nice if they received more recognition on campus for their hard work and skills.

The band will be using the feedback they received from the judges to help them with the upcoming Reno Competition.