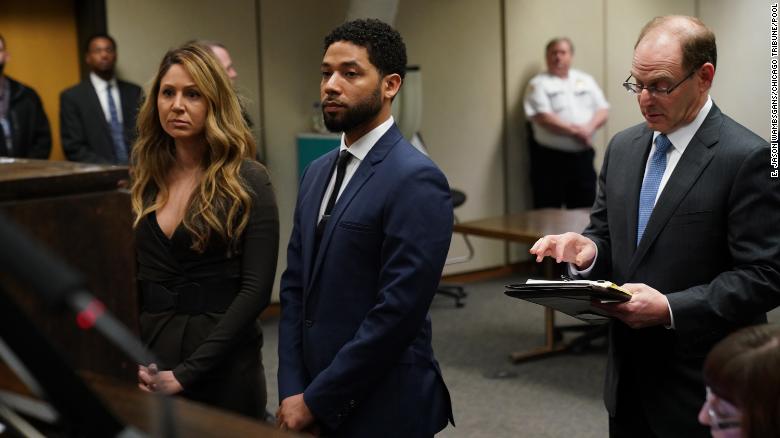 Right and wrong versus greed and wealth, on Feb 29 around 2 am in downtown Chicago, these morals and more were tested when Jussie Smollett reported that he had been attacked on the streets.

Smollett reported that he was punched, kicked, had a mystery chemical poured on him, and had a noose tied around his neck all while two mystery men were yelling “this is MAGA country.” Smollett came out as gay a few years ago and is apart of the African American community, so when the police report became public and everyone heard the news, many said this needed to be reported as a hate crime.

“They called me a f—-, they called me a n—-. There’s no which way you cut it,” said Smollett in his first on-air interview with Robin Roberts on Good Morning America.

His fans were outraged and most of the LGBTQ+ and African American communities wanted justice for Smollett. Many celebrities also came to his side to support him on his recovery back to good health after the attack.

“We have to love each other regardless of what sexual orientation we are because it shows that we are united on a united front and no racist f*** can come in and do the things that they did to you. Hold your head up, Jussie. I’m with you,” stated Lee Daniels, the creator of Empire.

All was good for Smollett and the investigation until it was allegedly discovered that he lied about the entire incident. The police investigation found two suspects who were described to look like the attackers, but once interrogated, they were let go with no charges.

The police found that the two Nigerian brothers that are allegedly the attackers against Smollett were actually hired by him for $3,500 to stage the entire attack so he can get a salary raise on his TV show Empire. Once these reports came out many who were on Smollett’s side turned against him and started doubting if what he said was true or not.

“This redundant and vindictive indictment is nothing more than a desperate attempt to make headlines in order to distract from the internal investigation launched to investigate the outrageous leaking of false information by the Chicago Police Department and the shameless and illegal invasion of Jussie’s privacy in tampering with his medical records,” stated Mark Geragos, one of Jussie Smollett defense attorneys.

Once this new information was released, many question Smolletts character as a person and that he is more focused on greed then the greater good for the LGBTQ+ and African American communities. Many believe because of his alleged fake attack then he has brought upon a negative context onto the different diverse communities and has given them more struggles then they already have from the public.

“I think that fake crimes are detrimental and take away attention to true crimes. But the root of the problem is still the same, the fact that these problems exist and push people to even commit it themselves shows that there’s a deeper meaning when it comes to marginalized groups,” explained Alyssandra Ortanez (12).

This controversy of hate crimes against different diverse and minority communities has become the topic to many conversations here at Heritage High School.

“I believe that the LBTQ+ community is already under extreme fire for coming out and being who they really are, so Jussie attacking himself puts a negative backlash onto the gay community. It makes others assume that they fake the hate towards them to get attention when in reality they get attacked for being who they really are and loving whoever they want,” explained James Flores (12).

Smollett is still saying that all the reports are false and that “it feels like if I had said it was a Muslim, or a Mexican, or someone black, I feel like the doubters would have supported me much more. A lot more. That says a lot about the place that we are in our country right now.”

In the end, the attack against Smollett comes with pain and heartache. After new information being released, people feel that greed and wealth has taken over Smollett and that he wasn’t focused on the greater good of others who would suffer more than him. Right and wrong seem to be ignored in the attack and wealth with greed took control of his morals as the public is viewing this attack now. The story is still currently developing.