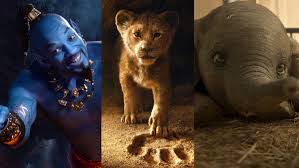 Let’s go back to July 2019; I sit down in a crowded theater next to my friends and watch previews play on the widescreen.  The movie begins and the audience hears the beginning of “The Circle Of Life” and the image of a rising sun- a scene I have been familiar with since childhood. And after two hours, I walk out of The Lion King (2019) with a throbbing headache, saying it was just as bad as I thought it would be.
I adore the story of The Lion King. In fact, it is in my favorite Disney movies of all time. The beautiful and vivid animation has always mesmerized me and (if provoked) I will belt out all of “Can You Feel the Love Tonight?”Yet, it would be an understatement to say that the remake did not please me. The movie implored groundbreaking technology and a cast filled with A-List stars, which to say the least is impressive. However, the realistic CGI lacked discernible personality and made the characters emotionless, the beige color palette was unpleasant to the eyes after about 15 minutes because everything looked the same, and the cast, despite their efforts, were not natural voice actors.

As I walked out of the theater, I wondered why these remakes were still being made. The answer is quite obvious, almost blatantly so: money.
Forbes estimated that the average production cost of a Disney live-action remake is about $180 million. That sounds expensive to the normal film-goer, yet compared to the typical 3D animated movie, the remakes are significantly cheaper. The average cost of these animated films is a reported $140 billion, a risky price for many film studios.
With the cheaper budget, the remakes also have gigantic box office returns compared to original live-action Disney movies. Beauty and the Beast (2017) and Alice in Wonderland (2010) have grossed over $1 billion at the box office while movies like Tomorrowland and The Nutcracker and the Four Realms have grossed less $210 million. It isn’t difficult to see why they have invested more in the former than the latter.
Disney has figured out that this formula is especially efficient because general audiences love familiarity. Because the public that has watched Disney films over the years have grown fond of certain stories and characters, the mega-corporation is able to capitalize on a plot that they already know people have enjoyed in the past. Essentially, it is taking a beloved product, recalling it from shelves, slapping a newer label on it, and re-selling it to the market as a “repackaging.”
“[Disney live-action remakes] make a lot at the box office because people already know the plots,” said Mr. Fogelstrom, a film analysis teacher at Heritage High School. “Disney is a business and their number one goal is to make money for their stock shareholders.”

Box Office Mojo states that out of the top ten grossing films of 2019 so far, only one movie was not based on a pre-existing property (Jordan Peele’s Us). And every day it seems as if a new trailer for a sequel or remake is released to the dismay of many people. Originality has become illustrious and harder to find than a unicorn.
The problem lies in the creative teams behind the remakes and general audiences. We have grown complacent with mediocrity in film to the point that risks are no longer taken.
An example of a creative remake is The Thing (1982), based off The Thing From Another World (1951). The film is vastly different from its predecessor, with a different tone, cast of characters, and plot structure. The only thing that remains from the 1951 movie is the basic premise: researchers in the artic face off with an inter-dimensional being that can shape-shift into any organism.
The Thing wasn’t a box office success (it only made $19.2 million on a $10 million budget) but overtime it has garnered critical praise and a cult following. In fact, I had no it was a remake until after I watched it; it stands alone as it’s own film.
More remakes should try to stand out on it’s own merits and avoid using the original as a crutch. If film-makers follow this, then originality might come out of hiding.