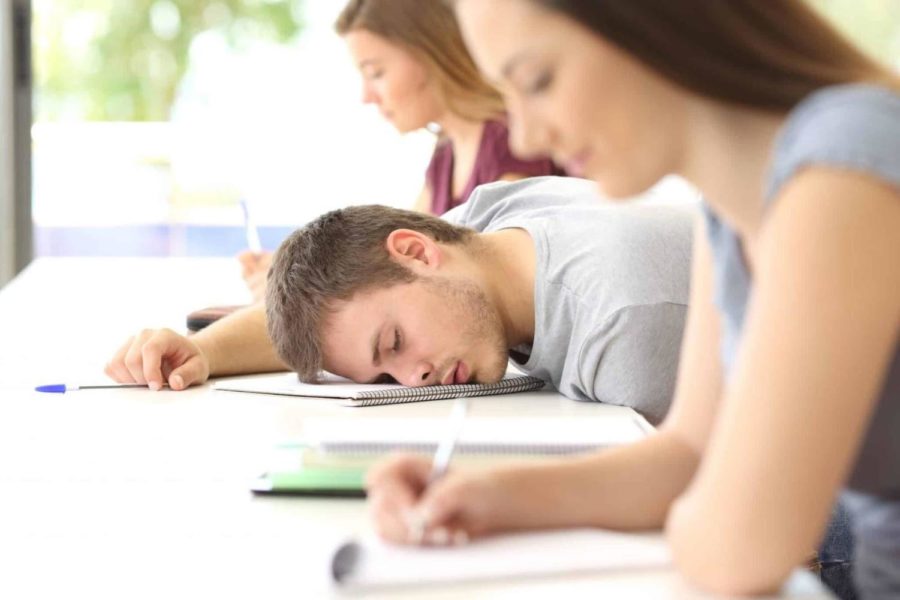 Tara Eastwood, Staff Writer
There is a new law proposed by the Governor of California, Gavin Newsom. His plan is to make the standard school start time later to allow students to get more rest. This will then lead to significantly better academic performance, and a decreased risk for anxiety and depression.
Middle school students will not be allowed to start school before 8 A.M and high school students will be postponed until 8:30 A.M. Although this seems to have positive outcome for students, it will have little to no effect on how much sleep students are actually getting each night.
In order to test this, a survey was performed to see how many high school students get the recommended 9-10 hours of sleep a night. The students surveyed were all high school students either from Heritage High School in Brentwood or American High School in Fremont, California. Heritage start at 8:15 and American High School begin at 8 A.M
Although it is unrealistic for teens to sleep this much every night, most of the people surveyed didn’t even come close. Out of the 15 students that were surveyed at random, only one of them get the recommended amount of sleep due to the fact that she does not have a phone to use at night.
The other 14 sleep no earlier than 10 P.M. Out of the 14 students that use their phone, on average, receive 6 and a half hours of sleep per night. Many of these students admit to staying up solely because of their phone and that they would sleep sooner if they did not have it. There are other reasons to stay up at night, but the overwhelming majority are due to the use of phones.
It should not be the government’s responsibility in ensuring that students get enough sleep. Changing the start time will in fact encourage students to stay up later because they know that they have more time in the morning. Therefore the amount of sleep will be roughly the same.
Not only are the students going to stay up longer, anyone who transports children to school will be affected. Parents that have to get to work are not able to get to work on time if their children start school later. Of course parents can force their children to go to school early, but this defeats the entire purpose of the bells being postponed in the first place.
The buses will also be affected by the change in start times. Alameda Contra Costa Transit District opposed this bill specifically because of the rise in cost for school transportation. The cost will go from $2 million to $3 million annually.
It simply does not make sense to have the government tell schools how to operate  when they are not the ones going to school. If there really needs to be drastic changes with the school system to benefit the children, then it should be up to each individual districts and the school’s board that decide on the outcome.
Extra curricular activities will also be largely affected. All the times will need to be rearranged to fit the new schedule. This will just lead to less time for personal matters, ultimately forcing students to stay up later, contradicting the purpose for the bill.
Not only do students participate in extra curricular activities, but many older students have jobs that they have to attend to right after school. Their professional lives will not be as lenient on them.
There are different ways to fix the overwhelming lack of sleep. The fact that students are not getting enough sleep is a problem because they are tired and anxious at school, but changing the start time is not the most logical solution. For example, homework is sometimes needed to master what is being taught in school, but an excessive amount is not beneficial. Decreasing the homework load can allow students to sleep more and have time for themselves.
Allowing the students to persuade decisions is harmful because it will give them a false idea of what life will be like when they have to work at early hours in the morning. On the surface, this bill seems like a great idea because it is aimed at the well being of students. However, if you look deeper, you see that it may not be as great as it seems because of how many people it will hurt.
People have been going to school early for so many years, so that is not the problem. It stems from the homes of students and the growing technology of society. Therefore, we should fix the source of the problem instead of changing everything else to counteract it.
The time that students go to bed is due to their poor time management as well as a lack of strict parenting. If parent were to enforce rules in the home to ensure that their children sleep enough, the problem will largely decrease because technology use will be prohibited.
Delete Image
Align Left
Align Center
Align Right
Align Left
Align Center
Delete Heading