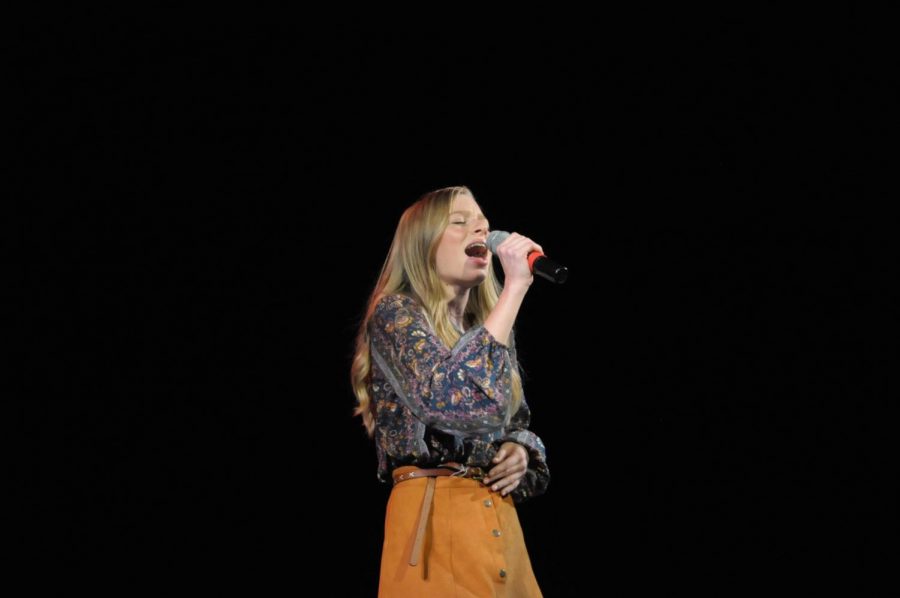 Ashlyn Soriano, Staff Writer
Lights. Curtain. Mic. It’s time for Heritage Idol to begin. Students take part in this event to showcase their vocals and compete with each other, but still have fun performing. With teachers judging based off of stage presence, song choice, and voice.
Performing on stage could always bring some butterflies. Creating nerves before stepping onto the stage. To ease themselves the students try doing different things. Such as drinking some nice warm tea, warming up, or even listening to some music.
“I like to help other people calm down because it soothes me by helping others,” expresses Autumn Gross (10).
Standing on the stage is unlike any other feeling. Performing is a whole other experience, especially when it’s something you love. Having the spotlight on and the audience’s attention brings a rush of adrenaline.
“Even though I’ve never made it to top 3 in the past few years, I’ve always enjoyed performing in front of people,” mentioned Ashley Mae Co (12).
Finding the inspiration to sing is found everywhere. From certain artists to all sorts of musicals spark the interest of singing. Starting from the inspiration and growing to love the art.
“I really like Stevie Nicks…I love her energy and she’s just amazing,” states Sarina Grossi (11).
After two nights of performing the top ten performers were chosen. The final ten were Marin Fallows, Stephani Clark, Chay Abanid, Savanniah Dominguez, Sydney Strong, Olivia Greenway, Isabella Catriogne, Kayla Kackson, Ashley Mae Co, and Sienna Johnson.
Once everyone had sang and given their performance on. Judges had evaluated all the performances, it had comedown to two people. Ashley Mae Co runner up, with her performance of Holding Out For a Hero and Home from Wiz. And winner Sydney Strong with her outstanding performance of I’ll Always Remember Us This Way by Lady Gaga.
Even though this was a competition it was still all about having fun and enjoying the performances. For the students to make new friends with people who share the same love and passion they have for singing.