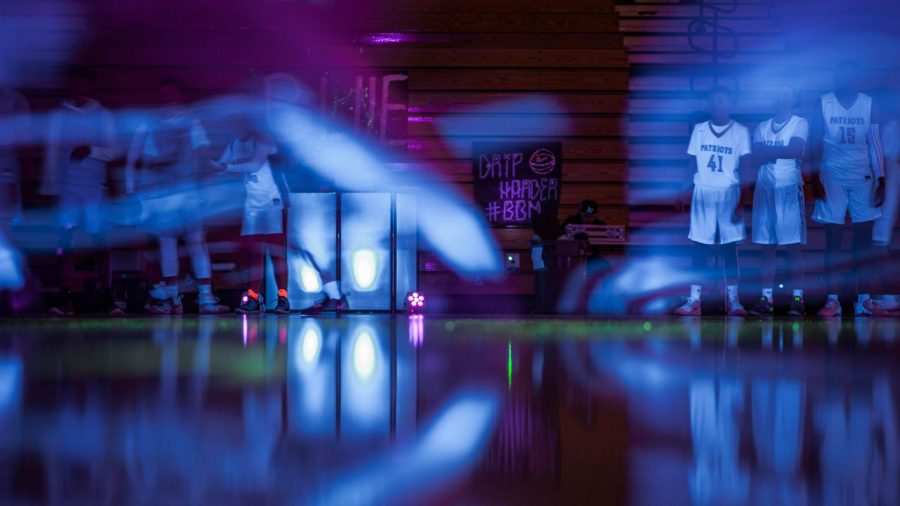 Kayla Fernandez, Staff Writer
Heritage’s only night rally, Big Blue Madness, was just a couple weeks ago! This year, the rally was on Monday January 13th, at 8:30p.m. All you needed was your student I.D. and some patriot pride to get in!
The spirit week for Big Blue Madness took place January 13th-17th. If you missed out on any of the spirit days, Monday was Big Chillin’, pj’s day, Tuesday was Big Ballin’, jersey day, Wednesday was Big Jammin’, any music or band tee, Thursday was Big reppin’, U.S.A. apparel, and Friday was Big Blue, which meant go all out on patriot pride.
There was a lot planned for this rally. The dance team was preforming as well as the varsity cheer team. Both the girls and boys varsity basketball teams were announced and came out. There were also a lot of decorations and posters up done by leadership students. The theme of the event was space jam and students were even able to buy a customized jersey or t-shirt.
Jenna Noriega(11) is apart of leadership and helps with the set up and clean up of the rally’s. According to Noriega, to set up for a rally it takes about three hours and the cleanup takes  around two.
“Last year we did a bunch of decorations, but this year we’re not doing as many so set up’s probably going to take an hour and a half to two hours possibly because we have to do DJ and other stuff,” stated Noriega(11).
The cheer team had been practicing their routines and cheers for the rally for a while. Alise Ochoa(11) is apart of the varsity cheer team and enjoys preparing for the rally’s and other occasions.
“The team has been going over the dance and cheers so much during practice so we can get everything right. I’m super excited to be performing and Big Blue Madness is my favorite rally of the year so I hope a lot of people show up,” said Ochoa(11)
The rally was definitely a great one this year. The lights were off in the gym during it, and everything appeared to be neon and glowing. Leadership went all out on the decorations and posters and made the gym look great!
Nolan Rollins has gone to Big Blue Madness every year he’s been at Heritage and says this year’s rally was the best one yet.
“The rally’s are always fun but Big Blue Madness is the best one. This year was definitely the best one because of the decorations and the music and everything. Every year after the rally’s I enjoy going with my friends and getting food with them,” stated Rollins(11)
If you missed the rally this year, you missed a great one. The cheer and dance team did a great job performing and the rally got the basketball teams ready to play against Liberty on Tuesday the 14th.
Both the girls and boys varsity beat the lions! It was a close game for the boys, but they managed to take the win. We can’t wait for the next Big Blue Madness!
Delete Image
Align Left
Align Center
Align Right
Align Left
Align Center
Delete Heading