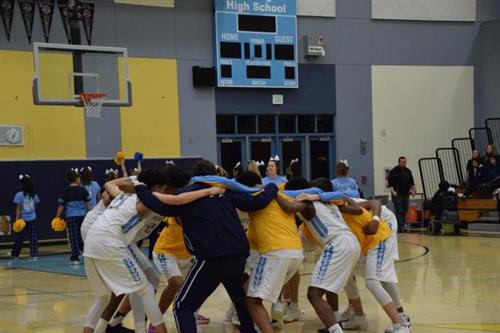 Stay calm, basketball fans the season has begun. After the week of tryouts we finally have the 2019-2020 Heritage Varsity, JV, and Freshman basketball team.
The boys had tough competition this year to make the team. At least 40-50 boys attended tryouts this year and as each tryout went on the boys put their best skill sets to impress the coaches.
“ Many talented boys tried out this year, putting their hearts out on to the court making it a very difficult to select the players for this years team,” said Coach Perales.
The basketball team has had a great start to the season. All 3 of our boys basketball teams had won their 3rd- place games in different tournaments.
Varsity defeated KIPP King 52-38 up in McKinleyville, JV took down Las Lomas 69-63 at Monte Vista, and Frosh beat Freedom 81-61 at Liberty.
The boys varsity team had a hard loss against San Ramon Valley. Led by four at the half, strong showing against a good team. John Mackay led the way with 18 points, Sebastian Duran had 9 points, and TJ Glasper had 8 points.
” We are 2-3 right now, we started off a little slow but were going to pick it up,” said Brad Ehlen (11).
Despite the record of the team currently ,2-3, Varsity can still pull through to qualify for BVALS.
Last season, Heritage Varsity Basketball boys had a solid team winning the BVALS and NCS. This years team looks like it will be as strong as last years.
The biggest competition this year for each team is Heritage rivals the Liberty Lions. The JV and Freshman are killing it in the court and have no doubts of losing against Liberty. The Varsity boys are going strong this season to defeat them.
” Last season we lost two games against Liberty. This season my team and I are ready to defeat them and play strong at the game” said Isaiah Hinds (11).
“ This is my first year playing at Heritage and I am preparing myself to play against Liberty. I really want to win against them,” said Tre’von Jones (9).
Overall, Heritages basketball boys are looking good and looks like it will be a great season. Let’s make it to BVALS two years in a row. Go Patriots!