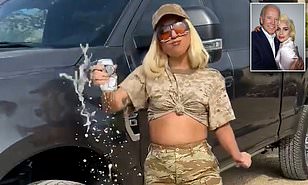 In light of recent events such as the upcoming election, the well-admired popstar, Lady Gaga, has received backlash from fans and President Donald J. Trump after posting a pro-Biden video. Gaga was seen wearing camo clothing, black hunting boots, and drinking a beer as she leaned against a pickup truck, seemingly mocking “rednecks.” Many took offense to Gaga’s video, and said it was a push in the wrong direction.
People in swing states such as Texas, Nevada and Ohio were encouraged to vote by the pop singer, but many people on Twitter fired back at Gaga, telling her what she had done was offensive and wrong. The people living in these states felt stereotyped by Gaga’s actions and outfit choice.
“I don’t own a truck, never worn camo or drank a beer so if this is your idea of #TrumpSupporters, you’re dead wrong. We’re college-educated, hard-working people who love our country but nice try GaGa,” said one Twitter user, responding to Gaga’s original video.
There are many opinions sprouting from Americans on what they think of Gaga’s campaign ad, but not all are negative. Some choose to stand for Gaga.
“This video is no different than republicans mocking [democrats]. I guess it only really deeply matters when it’s ‘important’ people like that. I see nothing wrong with it. Just because she’s a celebrity doesn’t mean she can’t have her own opinion or say whatever she wants.” said Blu Ziv (11), a student attending Independence high school.
Some fans of Gaga’s felt mocked and targeted after this video was released and chose to voice their opinions on multiple forms of social media.
“She’s mocking….and with that she just lost the most important thing…respect your middle American fans…won’t watch her or buy her records ever again…what I have went into the trash,” said Ruthanne Degen, a user on YouTube.
After receiving backlash from fans, Gaga released a statement saying she was mocking her past self, once living in swing states herself, and did not mean to offend anyone. Many people have taken her statement into consideration but she has lost respect amongst a handful of people.
Gaga released this campaign on behalf of the Biden campaign, and were encouraging viewers to vote ‘for’ America by voting blue. Many took offense to Gaga voting democratic and also pushing the idea that others should as well, feeling that their political views did not matter. Some even felt betrayed by Gaga, claiming to have been fans for a long time.