Biden Bus Ran Off the Road 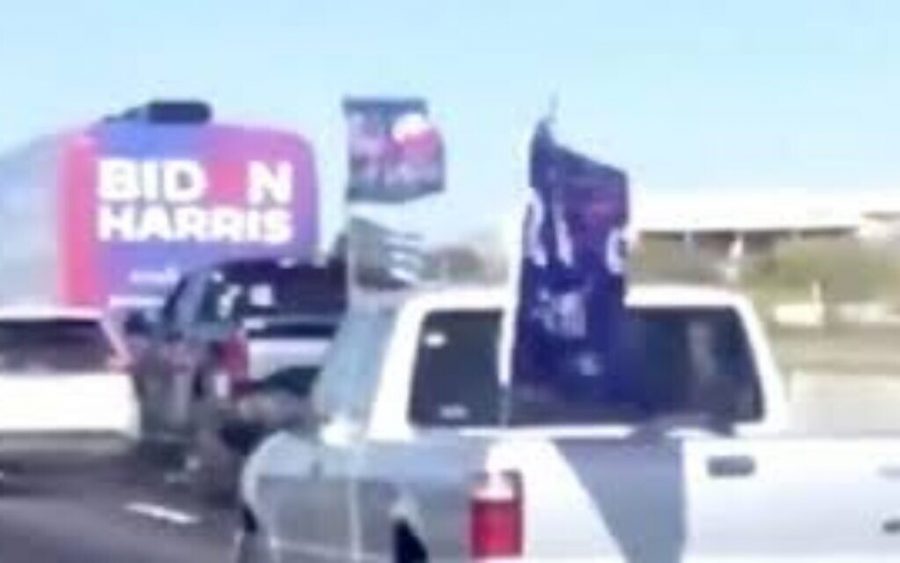 With the anticipation of the election roaring, and the coverage of it gaining the attention of the American people during what is said to be the most controversial and important election in history, often times people are wondering who has their vote. In the wake of a deadly pandemic that is causing economic downfall and running poor families out of their homes, not to mention that it is all happening in an election year has gained the most amount of registered voters out of any election in American history. Voter turn out is in record number, and the ballot choices are very divisive.
With election coverage dominating the media, it is safe to say that viral videos and pictures grabs the attention of the public. They usually result in swayed thoughts and opinions on what would be best for the country during the Covid-19 crisis.
In recent news on November 1st, a video had surfaced of supporters of the current president Donald J. Trump swarming a political campaign bus on a Texas highway. The video showed many different trucks and cars displaying their full support to President Trump with political imagery and flags in the beds of trucks. Aggressively driving around a Biden Campaign bus was an attempt to intimidate the driver and possibly the passengers as well.
One student in particular who has seen the video once it surfaced was Ambria Gee (12)
She recalls the experience of seeing the video and while she did not necessarily agree with the act, she claims that in no way did the video sway her political opinion on the matter.
“I don’t think it was a threat to the campaign in a sense that it would hurt either campaign’s number of votes… It did not sway my opinion of either candidate themselves,” said Gee.
A lot of people say their political opinions openly, while others may think that it is to be taken with caution.
Euan McManus (11), exclaims that it is a true representation of the divide in the country.
“I’d day It’s terrible. It is a true representation of the political divide that exists within this country and how it it sending an already not-so-good country and making it plummet down hill and how things such as political debates can endanger human rights,” Said McManus.
Strong opinions like McManus’s is what is sending the country into a divided frenzy. With every one having such different views from one another, it tends to cause serious division upon political views like what has never been seen before.
Donald trump, the current president, thought it was just an act of support and nothing violent had happened and nobody was harmed.
“Anybody see that picture of their crazy bus driving down the highway, they are surrounded by hundreds of cars, there are Trump flags all over the place… what a group,” said Trump at one of his rallies right after the incident.
Whether the act causes divisiveness across the country or not, it allows voters to gain insight on the actions of the candidate’s supporters. It allows them to tell whether or not they should be voting for them in the election, and also tells about their supporters and their candidate’s personality.
For more information on the event:
– https://www.dailydot.com/debug/trump-i-love-texas-biden-bus-tweet/
– https://www.cbsnews.com/news/fbi-launches-investigation-biden-bus-incident-texas-trump-supporters/